15 stupid pieces of breastfeeding advice you need to ignore 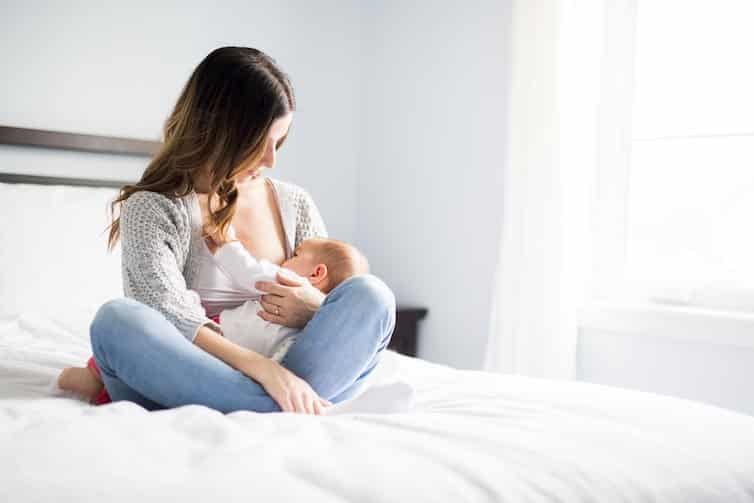 When it comes to babies and everything to do with them, everybody has an opinion!

Breastfeeding is one of those topics where people seem to think they’re an expert or spread myths like wildfire.

It’s sad because breastfeeding is so tricky in the early weeks, and the wrong information can mean the difference between continuing to breastfeed for an entire year or stopping after a few days.

There are lots of articles on this site about breastfeeding and how to stick with it, but this article is going to focus on the things you should definitely ignore.

These are the stupid pieces of advice, some of which I myself was on the receiving end of, that new mamas should most definitely ignore!

1. Start a feeding routine once your baby is born

Good luck with that. Newborn babies don’t conform to a schedule. This is a general rule of course, there are some babies out there who will be regular feeders from day one.

Most however will be all over the place in the early weeks. There’s no point in trying to control it or withhold feeds until an allotted time.

If your baby appears to be hungry, then feed them. In the early days they might be feeding every hour.

Some babies will feed for hours on end in the evenings, which is known as cluster feeding.

It’s hard work, but just go with it and take care of yourself. This is all totally natural breastfed baby behaviour.

This one is a yes and no answer. A good diet will help your body produce milk, but ultimately it comes down to just two things:

If you are eating tons of amazing lactation smoothies and cookies but only putting your baby to the breast once a day, then your supply will tank.

A great diet can help to boost your energy levels, so it’s certainly worth paying attention to what you are eating.

But don’t assume you can boost your breast milk supply by simple eating alone. You need to keep putting your baby to the breast. It’s all about supply and demand.

One of the first things I was told on the maternity ward at hospital was that nipple cream would stop my baby latching on properly.

I was told nipple cream could impact on breastfeeding.

This is something I have never read or heard since, but at the time I thought I had to stop using the nipple cream! Unfortunately it was the only thing that was helping to soothe my sore nipples.

The truth is that nipple creams are tried and tested to be used while breastfeeding your baby. They are natural and non-toxic so you can put them on before a feed.

4. Exclusive pumping will mean your baby misses out on nutrients

Another gem I received from the hospital was that milk produced by pumping will not yield a full feed. She claimed that using a pump does not access the fatty milk at the end of a feed, just the thirst quenching stuff at the beginning.

This is not true! You can physically see your breastmilk has all of the correct consistencies of a normal feed, as after pumping, it will separate out to two layers with the fatty layer sinking to the bottom.

Exclusive pumping does work! Also, pumping the odd feed for your baby can work for some mamas too.

5. Breastfeeding is natural and easy

Of all of the breastfeeding advice that ever was, this is by far the worst, and the most dangerous.

We are told breastfeeding will come naturally, and that we will find it easy to get to grips with.

This is completely wrong.

Breastfeeding is confusing in the early week especially, when your baby and you are just getting used to things.

Issues in the first few weeks of breastfeeding can include struggling to get the latch right, being unsure if baby has had enough, not knowing when to switch breasts and feeling like the feeds are just endless.

As your supply has not yet established, you may feel like you are breastfeeding every 30 minutes all day long, and night too!

It’s tiring, so if you are told this should be “natural” and “easy”, it’s going to make you feel pretty rubbish!

If you are pregnant or just starting out with breastfeeding, I suggest reading up as much as you can about the realities of breastfeeding now.

It’s never too early to arm yourself with information. You could try a breastfeeding course or get a book to give you the best start to nursing.

6. Giving formula at night instead of nursing is fine

After a few months maybe but not in the early weeks.

The nights are when your breastmilk-making hormone levels are at their highest.

This might seem cruel, but the fact is to boost your supply you need to be feeding regularly, including overnight.

Do not replace all night feeds with a bottle. If you do want to introduce an evening bottle, this is fine, but just make sure you are then still feeding in the early hours of the morning when your baby wakes.

7. Supplementing with formula will mean you fail at breastfeeding

Wrong. In the early weeks a little formula can actually help a despairing, exhausted mama to keep at breastfeeding.

The only issue you may have with introducing formula is if you give too much in the early weeks. Your breasts need to be frequently fed from and drained in order to continue producing enough milk to nurse your baby.

But say you haven’t slept in 24 hours, you’re still in pain from giving birth and you just want to sleep. Offering a bottle at this point will not do any harm.

Some people raise concerns about nipple confusion. This was never an issue I came up against. As long as you are continuing with breastfeeding most of the day, a one-off formula feed will not upset that.

If you need the break for your own health, then take it.

8. Breastfeeding does not hurt

Such a lie! Breastfeeding DOES hurt in the early weeks. This can be because of a poor latch which has caused sore nipples, sensitive nipples getting used to constant feeding or the letdown.

A poor latch can cause a sore nipple because the baby is pinching and chomping on the nipple, rather than it resting on the tongue and roof of the mouth towards the back of the mouth. A poor latch can lead to cracked and bleeding nipples which is really not nice, but they will heal quickly once you correct the latch.

You can try nipple shields to help your nipples heal as you continue to feed.

In the early weeks when your baby is feeding every hour, your nipples are being used in a way they are not accustomed to! This means you may have some soreness.

The letdown is when your breastmilk producing glands contract to push milk towards the nipple. It feels a bit like an electric shock, and it can also cause you to have cramps as in the early weeks breastfeeding helps your womb to contract back to its normal size.

Size does not matter. Tiny boobs can produce plenty of milk to nurture a growing baby.

The size of the breast does not indicate how much milk the glands will be able to produce. Breast size is down largely to fatty tissue, so don’t think tiny boobs mean you have fewer milk glands.

It works both ways. People assume big boobs mean mega milk production. But all mamas need to work just as hard at establishing and maintaining supply. It’s all about putting the baby to the breast as often as possible, not size!

10. Your baby will sleep better on formula

SOME babies may sleep better after you switch to formula. This could be a coincidence or maybe it does just sit in their tummy for longer.

But you may switch to formula and still face a dozen wake ups every single night.

Switching to formula has zero guarantee of giving you your nights back. In fact making up a bottle at 3am is more annoying than just lifting up your top.

12. Breastfeeding should not be done in public

A dated, negative and actually illegal opinion! Stopping a nursing woman for breastfeeding her baby in public is actually a discriminatory offence.

You can breastfeed your baby anywhere you want. Restaurants, cafes, trains, buses, parks, or even the office. In some countries, new mamas who are also politicians have been known to nurse their babies while sitting in on a debate.

The point is, in this day and age there is zero reason to oppose breastfeeding in public. Most people will be supportive of this, and maybe even offer you a glass of water.

For the ones who are not supportive, ignore them and carry on with what you are doing.

Wrong. My second exclusively breastfed baby never lost any weight. She was an awesome breastfeeder right from the start!

It totally depends on the baby and also the mama and how familiar they feel with breastfeeding. Some new mamas may not realise that breastfed babies feed pretty much constantly at the start.

This 24/7 feeding pattern is exhausting but it’s completely normal.

14. You must stop breastfeeding after returning to work

There are options to continue breastfeeding should you wish to after returning to work. Being away from your baby does not mean having to stop!

Breast pumps and their associated accessories are pretty awesome these days and you can pump feeds from both breasts in just 15 minutes in your office break room.

Chat to your manager about a spot in the office where the noise of the pump won’t disturb anyone and ask about having a corner of the fridge to store your milk.

Most employers will be more than happy to accommodate you. Pumping takes no longer than a normal break time, and actually you could continue to do some work while pumping, so there’s no reason for it to impact on your work productivity at all.

15. You shouldn’t breastfeed beyond one year

Actually you can breast-feed your baby for as long as you want!

If you want to continue breastfeeding your toddler, then carry on. It’s totally your decision and no one else should be influencing you on this.

Plus your child will continue to benefit from the nutrients in breast milk.

Have you ever heard any of these pearls of wisdom? What did you say in response?

Breastfeeding
How to build a breast milk freezer stash
Baby, Mum life
Will your baby be safe with a cat?
Baby activities, Play
Christmas activities for babies