I often scroll through the beautiful images of arts and crafts on Pinterest feeling utterly envious at how creative other people are.

I’ve written before about how I’m not a craft, Pinteresting mum. And that’s ok. The main thing is that I try, because my daughter loves playing with paint, making things and getting her hands dirty.

The trick for me is to remember my limits. If I don’t get too ambitious then the activity won’t stress me out when the end result looks like I took a hammer to it.

I’ve been toying with the idea of making our own play dough for a while but I was a bit nervous that I would just produce a brown splodge.

I did some reading and decided to just go for it. Once I told my toddler what we were doing she got really excited.

The ingredients are really cheap. I had never heard of cream of tartar before, but it’s in all supermarkets.

These are the ingredients, just add water!

I already had flour and oil, so I just had to buy the cream of tartar and the food colouring. I let my toddler pick the colour and she went straight for pink. A choice I’m more than happy with.

It was a really simple process and didn’t take long at all. Once the play dough was cooked it took hardly any time to cool and we were playing with it within a few minutes.

My toddler was thrilled and spent well over an hour making flowers, a snowman and various other shapes. I got out our cookie cutters and she made “biscuits” to have with her tea set.

My daughter loved using cookie cutters to play with the playdough

So I can thoroughly recommend this recipe. Don’t be daunted by it like me, it really is pretty straightforward. Just don’t let the pan get too hot and keep stirring the mixture.

Just a warning, this recipe has a lot of salt in it. But you do need it, so don’t cut it back. I think it stops the mixture becoming sticky. Have fun!

1. Put the flour, cream of tartar and salt in to a large saucepan. Stir it together.

2. Add the water and vegetable oil. Give everything a good stir.

3. Put the pan over a medium to low heat and stir continuously.

4. As the mixture begins to thicken, add the food colouring, I put in about three drops to make a nice shade of pink. You can add more to create deeper shades. It only takes about 30 seconds for the mixture to begin to thicken, so be quick.

5. Continue stirring until the mixture gets thicker and begins to gather around the spoon.

6. Remove from the pan and put the mixture on some grease proof paper to cool.

7. Give it a knead once it’s cool enough and it’s ready! 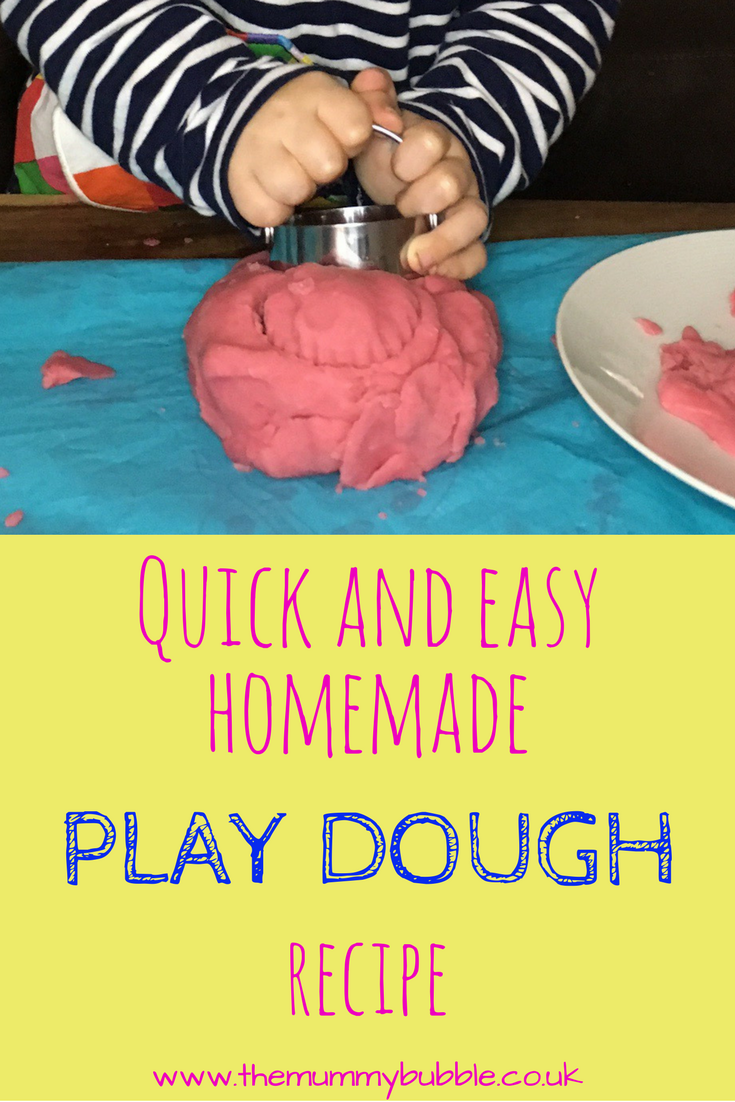