At long last my baby is sleeping through the night – 12 hours every single night – and I want to share with you the trick that finally stopped her night wakings.

It’s a blessed relief for us as a family because the sleep deprivation was having an impact on all of us. We were all crabby, too exhausted to do much and utterly fed up with the situation.

If you’re reading this it’s likely you’re in a similar boat to what I was. I’ll summarise my year with baby number two.

She’s always been a clingier baby than my first was, especially with me. I breastfed for seven months and she would often insist on sleeping with the boob in her mouth.

Read more about my breastfeeding journey in these posts:

I’m ready to quit breastfeeding so why do I still feel guilty?

How to survive the first 8 weeks of breastfeeding your baby

Because I had a toddler asleep in the next room and a husband who had a day of work ahead of him, I obliged her. Yes this probably set us up for bad habits, but I didn’t want to sleep train her before six months.

In my opinion babies of that age need to be given whatever they ask for. Yes you can guide them into a bit of a routine if you want to, but they have so many growth spurts that it’s not worth fighting the number of feeds they want every day.

Once I stopped breastfeeding, my baby continued having three solid meals a day, plus four bottles of milk in the day plus anything from one to two more at night.

Although she was having a few bites of solid food, she wasn’t really attacking it, she just preferred the milk. The problem was she wanted the milk in the night, at completely random times. 11pm, 1am, 4am. There was no guaranteeing what time she would wake up and demand a feed.

So what did I do to finally get my baby to sleep through the night?

We ditched the baby bottles and we stopped giving her milk in the middle of the night. 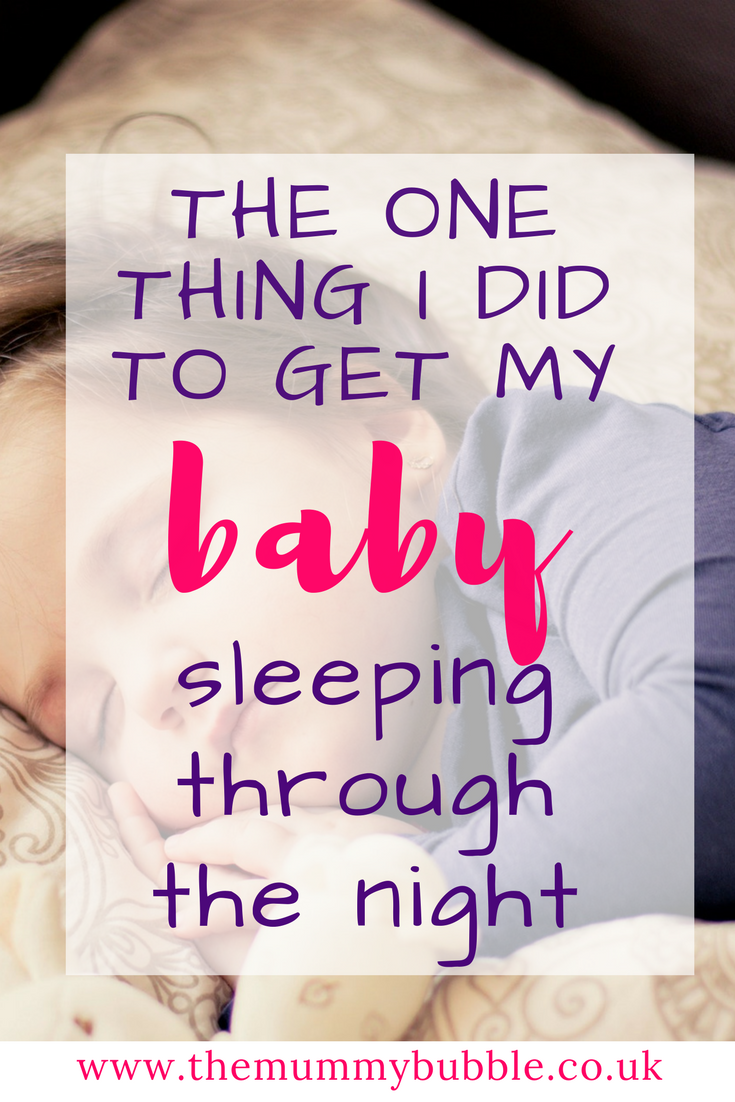 This was a difficult decision for me, as whenever we offered her milk at whatever awful hour she woke at, she guzzled it with huge enthusiasm as if she hadn’t eaten for days. She then drifted off back to sleep after just five to ten minutes.

It was working, so I was loathed to stop it and I was worried she genuinely was hungry. Plus the sound of crying in the middle of the night is even more jarring than during the day.

But after she turned one I went back to work and the interrupted nights became less easy to deal with. We had all had enough.

So finally I said, that’s it. No more baby bottles and no more night feeds. I figured the baby bottles were providing her with suckling comfort and soothing her back to sleep. I wanted her to learn to get herself to sleep without the comfort of a bottle.

However I’m not a total meanie and if she was thirsty I didn’t want deprive her. So instead of milk I gave her water in a cup.

Water is less fun than milk and the cup took more effort on her part to drink from. It wasn’t giving her the comfort of suckling and so encouraged her to self-soothe back to sleep.

So, how did it go and how long did it take to work?

The first night she cried for about two hours pretty much non-stop. She was horrified to not be getting her bottle of milk and screamed to let me know!

I knew going into this I had to persevere, because I knew she would be upset. I was introducing a totally new routine after all.

I told myself I needed to give it at least a week to see how it went and then reassess from there.

But I didn’t need a week. Because after three days that was it. No more crying in the night, apart from the odd stir lasting about five minutes.

It’s incredible that this worked in such a short space of time. My baby eats extremely well in the day and goes to bed very happily at night.

She’s growing healthily and I have no worries at all about her losing this night feed.

You may also like to read: 25 Baby sleep tricks

If you’re in the same boat as I was, here are my tips for implementing this strategy.

Train your baby to use cups

Make sure your baby is confident with drinking from a sippy cup. Let them practice a lot as this is a skill to be learned and not all babies take to it straight away, so persevere.

If you’re worried about calories, why not add a milk feed in the day somewhere? You could try doing three to four bottles a day and see if that makes a difference.

The important thing is to stop giving milk at night. For us the milk was a comfort thing rather than something she actually needed.

If you’re worried that ditching a milk feed in the night could mean your baby won’t be eating enough, then keep a record of what she or he eats over the course of a day.

Are they eating enough solids? How many milk feeds are they having? This could reassure you that actually they’re eating a lot in the day and a bottle of milk in the middle of the night is not required.

Crying is awful, believe me I absolutely hate it and it breaks my heart. But I’m telling you, my baby is absolutely fine, happy and still loves me to bits. Plus she has a Mummy who is way happier because she’s getting more sleep.

Now I don’t advocate leaving kids to cry forever, that’s just mean. But I do think leaving them 15 minutes when they’re age one and over is not something to fear.

When my baby had been crying longer than this, I went into her room, offered the water and gave her a nice cuddle for a few minutes. But I didn’t linger too long. I wanted her to know this was bed time, not play time.

The first night might be absolutely awful. They may cry nearly all night. The solution to this is to do it on a night when you don’t have too much to do the next day.

If you give up after just one night, you haven’t given the new regime a chance. You really need to give it at least a week. It might be a horrendous week, but think of what you’re trying to achieve. Proper, healthy sleep for the entire family.

You are not the only parent who has ever had a child who won’t sleep all night. Talk to others and ask what they did to improve sleep. This can make you feel way better about your own situation and give you confidence in doing something different to improve the sleep.

I did this with my one-year-old, healthy baby. I would never have done it prior to six months, though would have tried it after this had I known it would be as effective as it was.

I wouldn’t recommend doing this with a young baby, they need the calories spread out across the day because their tummies are tiny.

Read more: How to survive a day of parenting when you’ve been up all night

I hope this information helps you as much as it helped me! If you have any questions please leave a comment below.